Running Mayor for Blackburn and Darwen, Andrew Gardner, is man on a mission to get more of us into our trainers and out of the house making running part of our wellbeing self-care:

“Running is for anyone – that’s one of the reason’s it’s so great is that you literally go at your own pace, and whatever ability level you’re at is fine as you get started.”

After posting a running inspo blog about how he makes time for his own running, Andrew received a note from Christine Warrington who is part of the running club he’s a member of – Blackburn RoadRunners.

“I just read your inspirational piece about just getting on and running. And that anyone can do it. I totally agree with you. I didn’t think I could run. I know that my husband didn’t either.

“Seven years ago, I had a billion reasons why I couldn’t run and I honestly believed that I couldn’t.

“My family and friends didn’t run, didn’t do much activity, so why would I?

“I only joined Couch-2-5k because of a stupid bet that I made with myself. My point is that I am still a larger person, but I’m fitter and healthier than my husband who is slim and does no exercise.

“Now I could talk about my running all day!

“I want to promote running to bigger people who think they can’t because of the number of people that have said to me ‘if you can run, then I will have a go’

“They don’t mean it in a mean way, but if I give them confidence to try running, or do something to make them healthier, I’m happy to be their inspiration.

“I just want to help everyone understand that you CAN do it if you want. To understand that every runner is out of breath, gets winded walking up flights of stairs, that real runners encourage each other, they don’t ever judge others running because we know, it’s not easy, for anyone. But it is achievable.

“The point is, I heard what you said about running being for anyone but in the back of my mind, I still had the voice that said “Yeah, but have you seen him? He is fit, he was slim before, so running is OK for him”

“Then I remembered that I ran a 10 mile race yesterday and I wasn’t last. My pictures still show a lass with an obese BMI but I did it. I want to show Blackburn that they don’t have to be super-fit like you. But they can be healthy.

“I just want to share with other bigger people that at the end of a 10 mile race – I felt really great! And when I ran the Blackburn Road Runners 10k in February 2019 I raised £1000 for East Lancashire Hospice!”

“Christine, you’re a wonderful member of the Blackburn RoadRunners. Thanks so much for sharing your story with BwD – we already heard inspirational stories this year from Ian Goodliffe about his journey and Tracy Davies, too.”

“I keep telling people – and I’ll happily tell them again and again – running is so good for you inside and out, just give it a try!”

Sign up for the 2022 Blackburn Roadrunners Winter Warmer now 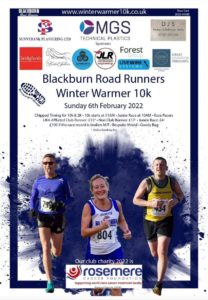